NIATx Principle # 4: Getting Ideas from Outside the Field …Or From Inside Track and Field 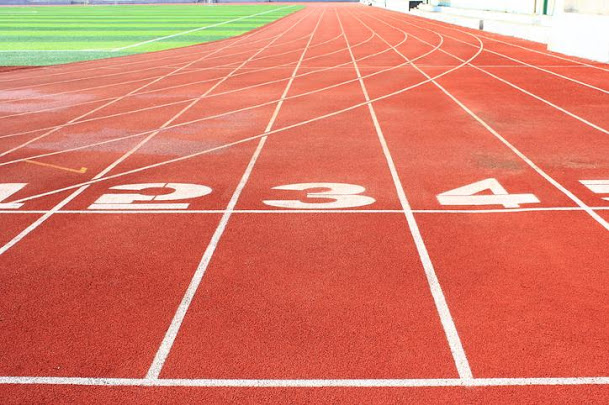 The United States has consistently produced some of the best track and field sprinters for decades and decades.

And the United States 4x100 relay teams have been disqualified from a painfully large number of World Championship and Olympic races as a result of dropped batons or botched handoffs.

Why have these best-in-the world sprinters failed so often?

Because relay success requires both speed and the effective management of a multi-step process. In sprint relays, it's all about the handoffs.

Passing the baton around the track is an excellent representation of many handoffs that we see in health care and other industries. Whether we’re talking about products on an assembly line, information, or patients receiving care, the handoff can make or break the product's quality and the customer experience.

The secret of winning sprint teams

Sprint relay teams who have succeeded in winning championships—despite having slower runners than the other teams—have excelled because they have mastered the baton handoff. Contrast this with the American teams, who have been criticized for too much focus on team members' raw speed and inadequate focus on the baton handoff process.

By dissecting a complex process into its component parts and making focused adjustments to enhance efficiencies, you can achieve some amazing results.

Perhaps the less-than-speedy teams have used tools similar to the NIATx method to understand and improve their relay effectiveness:
The NIATx model has worked for many organizations in diverse fields making a wide range of improvements.

Not that we are suggesting a NIATx coach for the American sprint relay teams, but maybe ….

Mat Roosa was a founding member of NIATx and has been a NIATx coach for a wide range of projects. He works as a consultant in quality improvement, organizational development and planning, and implementing evidence-based practices. Mat also serves as a local government planner in behavioral health in New York State. His experience includes direct clinical practice in mental health and substance use services, teaching at the undergraduate and graduate levels, and human service agency administration. You can reach Mat at matroosa@gmail.com
No comments:

By Thomasine Heitkamp, LCSW
PI and Co-Director of the Mountain Plains ATTC and MHTTC 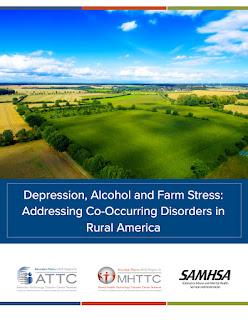 The Mountain Plains ATTC collaborated with the Mountain Plains MHTTC to create a shared product entitled Depression, Alcohol and Farm Stress: Addressing Co-Occurring Disorders in Rural America, [Co-occurring Disorders] April 2020 (M. Shogren, R. Landwehr, D. Terry, A. Moore and A. McLean). This blog discusses the rationale for product development, a brief description of the product, end-user comments, and collaborations with organizations, localities, and states. The topic of co-occurring disorders (substance use and mental health concerns) was identified as a significant training and technical assistance (TA) need in recent formal assessments conducted by the Region 8 ATTC and MHTTC shown below. 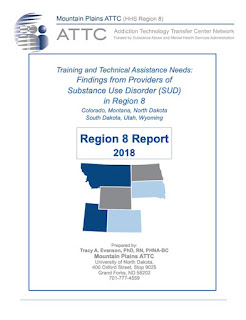 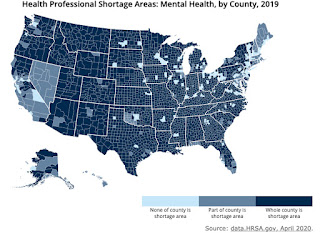 The Co-occurring Disorders product was produced to assist Region 8 behavioral health providers to improve and enhance their skills in treating co-occurring disorders. Users of this product are provided a fictitious case scenario that walks them through applications regarding use of screening tools (AUDIT-C, PHQ-2, PHQ-9, Health Leads, SIREN) to determine the needs of a farmer who is ultimately diagnosed with an alcohol use disorder and depression. The Co-occurring Disorders product also underscores the importance of family supports, referral to treatment, provider flexibility, and addressing compassion fatigue. The 66-page product includes evidence-based resources (81 references and 26 resources) and colorful photos to provide a narrative regarding screening and intervention related to co-occurring disorders.

“It was easy to understand, and one of the parts that I really liked was that we followed John through the entire process, from the initial start to the emergency room. I liked that because it was easy to see how it would work into a practice; the storyline and how it is incorporated into patient care and practice.”

“It reminds me that as a primary care provider, you might get a little numb to all the barriers that people are facing.”

Following publication and dissemination of the Co-occurring Disorders product, the Mountain Plains ATTC assessed end-user perceptions, including feedback by advanced practice nurses and APRN students who suggested incorporating this document into health career curricula, especially to prepare primary care providers. All feedback was positive, with a note regarding the informative nature of the product and the practical approach to assisting providers in expanding their capacity to address co-occurring disorders among farmers and rural residents. In less than three months, this product has served as the backdrop for additional training/TA activities provided by both the Region 8 ATTC and MHTTC. This includes:

The Co-occurring Disorders product has been accessed and marketed by multiple organizations, including the RHI hub, the National Rural Health Association, and the National Organization for State Offices of Rural Health, which provided a review in their monthly newsletters. Representatives of the United States Department of Agriculture (USDA) lead offices in the Region 8 states (CO, MT, ND, SD, UT, WY) have received the product and are critical collaborators in working on the topic of addressing farm stress through their numerous office locations. USDA has participated in past trainings and is more readily accessing TTC resources, given this collaboration. This effort reflected meaningful and ongoing collaborations among the TTCs and other behavioral health partners to increase awareness and enhance expertise on how co-occurring disorders are addressed in rural areas.

Thomasine Heitkamp, LCSW, is the PI and Co-Director of the Mountain Plains ATTC and MHTTC. She is a Chester Fritz Distinguished Professor at the University of North Dakota with more than 30 years of experience in behavioral health workforce development.
No comments: