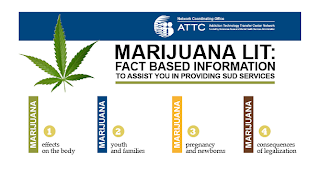 Marijuana Lit: Fact Based Information to Assist you in Providing SUD Services launched in January this year with a goal: to supply SUD providers with the straightforward, accurate information about marijuana from trusted sources. The team at the ATTC Network Coordinating Office has  been busy adding new information and resources!

Here's a quick recap of the most recent additions to the Marijuana Lit site, along with other ATTC activities related to marijuana use:
Latest video released: Pregnancy and Newborns. This video, the third in the Marijuana Lit series, features Dr. Laura Borgelt from the University of Colorado's Skaggs School of Pharmacy and Pharmaceutical Sciences. Dr. Borgelt shares the latest research on marijuana use among pregnant and breastfeeding women. She cites longitudinal studies that have linked marijuana use during pregnancy to decreased cognitive functioning in women's exposed children.

"There really is no known safe amount of marijuana that pregnant or breastfeeding women could use," says Dr. Borgelt.

(The American College of Obstetricians and Gynecologists agrees. Their recent recommendation discourages marijuana use among women who are pregnant or thinking about becoming pregnant.)

A new infographic accompanies the video on Pregnancy and Newborns, and like the other Marijuana Lit infographics, it's available in English and Spanish. Another new infographic,
Marijuana Use and Educational Outcomes,  was translated into Spanish in collaborationwith NIDA. As this infographic notes, regular marijuana by teens can lead to an IQ drop of up to 8 points.

And that IQ drop is permanent, as presenter Dr. Kevin Hill, M.D. pointed out in the June 2015 Third Thursday iTraining: "Marijuana: the Unbiased Truth."  You Can view Dr. Hill's presentation on the ATTC Network's Vimeo channel. The recorded webinar is longer than our usual 90 minutes -- Dr. Hill took additional time to answer just a few of the many questions posed by the audience. He will be answering the additional questions he couldn't respond to during the webinar due to time constraints via the Marijuana Lit forum  on the ATTC/NIATx Network of Practice.

Here's a teaser Q&A from the nearly 80 questions submitted during the webinar:

Q: Will there be an increase with addiction as marijuana becomes legal throughout the US?
Dr. Hill:  Another excellent question from the ATTC webinar. At this point, we don’t know if we will see increases in marijuana addiction as more states legalize the recreational use of marijuana. In my opinion, this will depend on many factors, including how well we educate people about the science of marijuana as well as how well the regulations are written. While many feel that there will be an increase in addiction as a result of legalization, it should be noted that an important research study was published on June 17 in Lancet Psychiatry that showed that states with medical marijuana laws did not have an increase in addiction among young people when compared to states without medical marijuana laws. Sometimes we think we know what will happen, but reality can be different.

To view the other questions and Dr. Hill's answers, just login to the Network of Practice. (Note: we'll be posting the questions and answers a few at a time.) Yes, it will require creating a password--but once you're in the Network or Practice, you'll join a growing online community sharing the latest information on marijuana research and best practices in treating people who use it.

One of those best practices is a Motivational Interviewing technique called Elicit-Provide-Elicit, and you can read more about it in the featured article in the June issue of the ATTC Messenger. Jennifer Wyatt, Research Associate at the Northwest ATTC, wrote the article with Ariel Singer, NW ATTC Program and Training Director. Jennifer is also available to answer your questions on E-P-E in the Motivational Interviewing forum on the Network of Practice.

In short: we're inundated with marijuana news daily--like today's news item from NPR:  Medical Marijuana is Often Less Potent than Advertised. (By the way, the next video in the MJ Lit series, Marijuana for Medical Use, is coming soon.) The Marijuana Lit series and other ATTC Network resources offer tools designed to make it easier for SUD providers to sort through all that news: the good, the bad, and the conflicting.

So check out one of the videos, download an infographic, read up on E-P-E, or join the conversations on the Network or Practice today, and let us know what you think!