Reduce Underage Drinking Today and You Prevent Opiate Use Tomorrow

Wisconsin, like many states, has seen its rate of underage drinking drop in the last decade. Over that period, law enforcement worked with community groups and coalitions to reduce youth access to alcohol. A new state law made it illegal to provide a location for underage drinking—even when adults did not provide the alcohol. In some communities, groups worked with police to make sure residents didn’t leave alcohol in unlocked garages or storage areas—where youth could pilfer it.

Sometimes we are asked why efforts to prevent and reduce underage drinking should continue when opiate abuse is at crisis levels. The answer is clear—alcohol prevention today is illicit drug prevention for the future. Alcohol is widely available and most often, first substance youth use, earlier than parents realize.  Research has proved that alcohol use in the sixth, seventh and eighth grades has an “especially powerful influence” over lifetime illicit drug use.[i]  Reducing underage drinking today is preventing a future opiate epidemic.

Further reductions in underage drinking may require changes in the community alcohol environment or culture. Fortunately, we know which policies are effective. We just need the social willpower to adopt and enforce them. Here are four ideas to consider:

First, keep youth-focused events and activities alcohol free. Twice this year I’ve seen well-intentioned but inappropriate community activities linking alcohol and Girl Scout cookies. One event was planned in collaboration with the Scouts and one was planned independently. Does your youth group, Scout Council or school board have a policy that makes clear official or named activities will not involve alcohol or normalize its use? If you don’t have that policy, ask for one; it forces groups to think through when alcohol isn’t appropriate. Without a written policy, you could end up with the post-football game beer tent for parents that one Wisconsin community narrowly avoided.

Second, don’t give your children alcohol at home. Now we have proof that giving youth alcohol to teach “responsible drinking” at home backfires. Research shows that youth given alcohol by their parents were more likely to binge drink than youth who were never allowed to drink. [ii]

Third, we can increase state alcohol taxes. Although it isn’t popular, it is effective, and most moderate drinkers will not notice the increase. Price-sensitive youth and heavy drinkers will buy less alcohol as a result, something we can all support. Over 100 peer reviewed studies that identified over 1,000 different price points make it clear—increasing the alcohol tax will reduce the amount of alcohol sold and generate much needed revenue for public services. [iii]

Taking steps, even difficult steps, to reduce underage drinking protects youth from injuries and harm today, while reducing the likelihood of illicit drug use in the future. That’s a goal parents, grandparents and anyone who cares about kids can support. 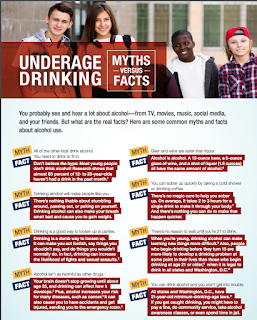 Related Resources from the ATTC Network:

The Wisconsin Alcohol Policy Project began on January 3, 2010. Julia Sherman, project coordinator, has worked on alcohol related policy issues since 2001, first at the American Medical Association’s Reducing Underage Drinking through Coalitions project and later as national field director for the Center on Alcohol Marketing and Youth at Georgetown University.