Drug Contamination Crisis: Connecticut and Beyond


New Haven, Connecticut, recently faced a rash of overdoses linked to a suspected fentanyl-contaminated supply of K2, a synthetic marijuana also known as Spice. Taken alone, the effects of K2 can be unpredictable and even life-threatening. Fentanyl, a synthetic opioid that is approximately 50 times more potent than heroin, is often clandestinely combined with other drugs and greatly increases the risk of lethal outcomes.

In the past week, over 70 people have overdosed, with a large majority centered around New Haven’s Green Park. Connecticut is not alone in facing drug contamination, specifically with K2. Brooklyn, NY, faced similar tragedy in May of 2018, with 87 people overdosing because of a particularly toxic batch of K2. Washington, DC, and Austin, TX, have also seen large numbers of overdoses, some fatal, resultant from K2 and contaminated batches of K2.

While none of the overdoses in Connecticut have been fatal to date, many individuals were in critical condition, leaving first responders with a massive undertaking. The safety of both individuals who use drugs and first responders is paramount and can be achieved through awareness, education, and resources.

Fentanyl and fentanyl contamination has been hard-hitting in New England. Awareness around safe handling practices for first responders is critical in an age of drug contamination. The New England ATTC recently offered training on Fentanyl Awareness and Safety and the Handling of Unknown Substances for First Responders at a university in Rhode Island. The New England ATTC is in the process of rolling-out this and other technical assistance focused on aiding first responders to other college campuses and other public safety departments throughout New England. 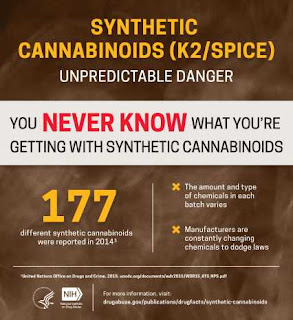 Learn more about fentanyl and synthetics with these resources from the ATTC Network:

Will They Turn You Into a Zombie?
What Clinicians Need to Know about
Synthetic Drugs
Pacific Southwest ATTC

Tonya Tavares, M.S., is currently the New England HHS1 STR Technology Transfer Specialist, as well as an Assistant Project Director at the Center for Alcohol and Addiction Studies at the Brown University School of Public Health. Her current research and service interests broadly include addressing the opioid epidemic, medication-assisted treatments and integrated behavioral healthcare, alcohol use disorders and other addictions; situational adaptation, coping styles, and resiliency; social determinants of health behaviors, acculturative stress; under-served populations, and enhancing minority participation in treatment and research. Tonya obtained her M.S. in Behavioral and Social Science Intervention at Brown University and obtained her B.A. in Psychology from the University of Rhode Island.