There’s a lot that’s new on the ATTC website!

Have you seen the new HCV Current site? We’ve also released Integrating Substance Use Disorder and Health Care Services in an Era of Health Reform, the first white paper for our project on Advancing Integration. 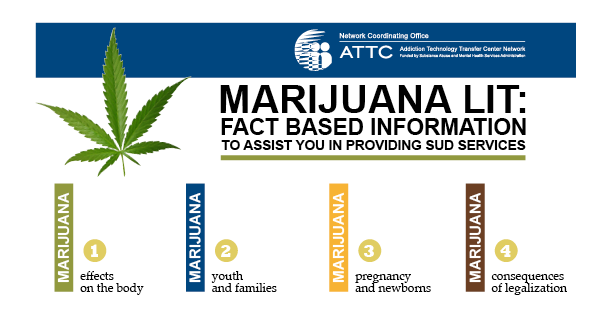 But another new item that we don’t want you to miss is the latest video in the ATTC Network’s Marijuana Lit series. Just released:  “Effects of Marijuana Use on Developing Adolescents.”

In this video, Dr. Kari Franson, Associate Dean for Professional Education, Skaggs School of Pharmacy, University of Colorado, talks about how teens’ developing brains wire them for impulsive behavior.   As Dr. Franson explains, the limbic region of the brain (the part that makes you feel good) develops in advance of the prefrontal cortex—the part of the brain that helps you think through the consequences of your actions. Marijuana use really does mess with your head: as Dr. Franson says, it complicates this limbic/pre frontal cortex imbalance, and studies suggest that teen marijuana use may upset developing that brain circuitry--which could increase the risk of future psychiatric disorders.

Other important considerations:
Dr. Franson adds that our brains are always a work in progress, with new brain circuitry developing daily. Her key message to youth today is to build those new neural pathways “from what you learn and what you know, and not from a mind-altering substance.”

Dr. Franson’s video follows up the ATTC Network Office’s iTraining presented by Dr. Yifrah Kaminer of the University of Connecticut, “Marijuana Harmfulness to Youth Wellness.” Dr. Kaminer’s PowerPoint slides and recorded webinar are also available on the ATTC vimeo channel. Dr. Kaminer cautions teens to ignore the information that abounds on the Internet about the health benefits of marijuana, as much of it is simply false or not based on science.

Other points from Dr. Kaminer’s presentation:
Also new on the Marijuana Lit site:  a new infographic from NIDA,  “Marijuana Use & Educational Outcomes.” A Spanish version will be available soon.

Next up, the third video in the Marijuana Lit series will feature another expert, Dr. Laura Borgelt, also from the University of Colorado’s Skaggs School of Pharmacy and Pharmaceutical Sciences, who will be talking about marijuana’s effects on pregnant women and newborns. Watch your email for information on its release and check the Marijuana Lit site regularly for new information and resources.