Just what are synthetic cannabinoids, and why are they so dangerous? 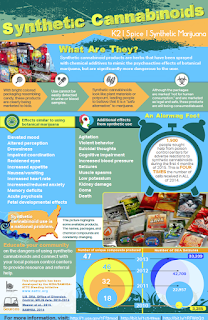 In a Brooklyn neighborhood in New York City, 33 people were suspected of overdosing on synthetic cannabinoids in a single day in July 2016. (What's a cannabinoid? It's any one of many psychoactive compounds in marijuana--with "THC" being the most widely known.) Synthetic cannabinoids with names like "K2" and "Spice" are herbs that have been sprayed with chemical additives to mimic the psychoactive effects of botanical marijuana. They're sold for recreational drug use as commercial products through convenience stores, tobacco shops, or head shops.

Marijuana is the most commonly used illicit drug in the United States, especially among adolescents and young adults. Changes in marijuana policies across states legalizing marijuana for medical or recreational use suggest that marijuana is gaining great acceptance. It is important for people to understand what is known about the adverse health effects and the potential therapeutic benefits of marijuana. This NIDA Research Report serves as a useful summary of what the most up-to-date science has to say about marijuana and its effects on those who use it.

And then there are synthetic cannabinoids

Synthetic cannabinoids are marketed under more than 500 names around the world, with "K2" or "Spice" as the most common brands. In contrast to real cannabis, they are inexpensive and easy to obtain at convenience stores, tobacco shops, or head shops. The adverse effects of using synthetic cannabinoids are often much more severe. Many compounds have been banned in the U.S. and other countries, yet loopholes allow new products to enter the market regularly.

Unlike classic illicit drugs such as heroin or cocaine, synthetic drugs have only appeared in the United states in the past few years, and because they are constantly changing, our knowledge of them is not as comprehensive as we would like. Alcohol, heroin, and cocaine have been subjected to years of toxicological and pharmaceutical testing and numerous clinical trials and research on the users.  What we know about synthetic drugs is often based on newspaper stories, pro-drug websites, and "street" information from users or people who don't really know the facts.

Synthetic drugs are chemical creations that are manufactured to cause the same changes in the user's body as illegal drugs that are derived from plants (e.g., marijuana, cocaine). Using synthetic drugs can produce serious health effects, including addiction, and in extreme cases, death.

Not for human consumption

Synthetic cannabinoids were first detected in the United States in November 2008, by the Drug Enforcement Administration's (DEA) forensic laboratory. These products were first encountered by the U.S. Customs and Border Protection. 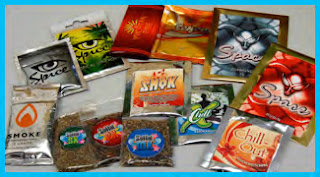 Synthetics, such as "Spice," are advertised as "all natural," safe, and legal--but in fact, they are none of these things. The packages often say "not for human consumption," "for novelty use," or "use as directed," without any directions for use. The colorful and professional packaging and working often changes as laws are amended. In some jurisdictions, depending on how the laws are written, the prosecutor must prove the person intended to use the product (not just possess it), which makes it even more difficulty to limit availability of these substances.

Sometimes referred to as an "herbal marijuana alternative," synthetic cannabinoids look like plant materials or potpourri. They are coated in chemicals that mimic the effects of marijuana when it is smoked or steeped in a hot drink. The chemicals defy detection in traditional drug tests, making them attractive to users. Labels on synthetics often claim that they contain "natural" psychoactive material taken from a variety of plants. These products do contain dried plant material, but chemical analyses show that their active ingredients are synthetic (or designer) cannabinoid compounds.

New products on the streets every four to six days

Synthetic cannabinoids have many different "names" that are given to mask the fact that they are chemical substances that have been created to produce some sort of high. The rogue chemists producing them are constantly changing the formulations so they can stay ahead of the latest federal and state legal definitions and laws to avoid prosecution. The variety of brand names, include Zohai, Geni, K3, Bliss, Nice, Black Mamba, Incense, Yucatan Fire, Skunk, Smoke, ChillX, Highdi's Almdrohner, Sence, Earth Impact, Gorillaz, Galaxy Gold, Space Truckin, Solar Flare, Moon Rocks, Blue Lotus, Aroma, Scope, Sky, OG, Potpurri, Bombay Blue, and even "fake weed." They are often sold in three-ounce plastic pouches decorated with psychedelic designs. Experts point out that due to the variation in chemical additives used in synthetic products, users don't know exactly what they're getting in each packet, making the effects unpredictable. 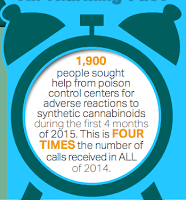 According to the DEA, over 250 synthetic cannabinoid compounds have been identified to date. The DEA also reports that there are as many as six distinct generations of synthetic cannabinoids appearing in the United States. A newly formulated synthetic drug appears on the streets approximately every four to six days, making comprehensive control of these substances a very daunting task.

Synthetic cannabinoid exposure can lead to unfavorable symptoms such as nausea, vomiting, agitation, psychosis, violent behavior, and suicidal thoughts.  An individual experiencing these symptoms after using a synthetic should be sent to an emergency room via ambulance. Since it's difficult to ascertain the exact drugs involved, a regional poison control center should be consulted. Acute management consists of supportive care with the use of benzodiazepines, if needed, to control agitation and anxiety. In general, all patients should be observed until the resolution of abnormal viral signs, vomiting, and psychiatric symptoms. It's important to note that the common symptoms described with synthetic cannabinoid exposure, such as agitation and tachycardia are not typical of those seen with marijuana exposure, making the diagnosis much more difficult. While there is limited research on specific interventions for synthetic cannabinoid use, the best recommendation is to engage the individual in evidence-based behavioral treatments.

The ATTC Network's Cannabis Blending Team will continue to develop and disseminate resources related to this issue. Check www.attcnetwork.org regularly for updates!


Beth Rutkowski received her Master of Public Health degree, with an emphasis on epidemiology and quantitative methods, from the University of Medicine and Dentistry of New Jersey, School of Public Health. She has been associated with UCLA’s Integrated Substance Abuse Programs (ISAP) since December 2000,and currently serves as the Associate Director of Training. The majority of Ms.
Rutkowski’s time is devoted to the SAMHSA-supported Pacific Southwest Addiction Technology Training Center,where she develops training packages based on evidence-based substance use disorder research and targeted to the community at large. In addition, she organizes and conducts conferences and trainings throughout the Pacific Southwest region (Region 9, covering AZ, CA, HI, NV, and the six U.S. Affiliated Pacific Jurisdictions) on scientifically validated interventions and topics, such as substance use disorders research and policy, methamphetamine abuse, synthetic drugs, process improvement strategies to improve client engagement and retention in treatment, SBIRT, HIV and drug abuse, substance abuse epidemiology, medication-assisted treatment, and best practices in addiction treatment.