Latinas in Recovery: Understanding the Evidence to Bridge Gaps in Service Disparities 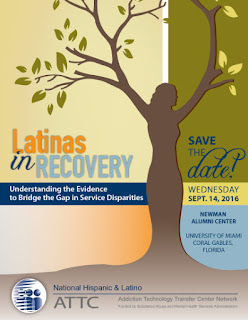 The National Hispanic and Latino ATTC symposium, Latinas in Recovery: Understanding the Evidence to Bridge Gaps in Service Disparities (September 14, 2016, Miami) will offer behavioral health professionals an opportunity to learn from experts while sharing their experiences in working with Latinas with substance use disorders.


The symposium will include presentations by researchers, clinicians, and Latinas in recovery. Their presentations will address the particular issues that may affect Latinas’ recovery processes. Presenters will also offer recommendations for professionals in the field.

Conference objectives include:
Following is an overview of some of the key issues that they symposium will cover.

Underlying factors for Latinas' substance use

Gender has been identified as a determinant of health, with women experiencing differences in rates of substance use and mental health issues. Gender risks may be acquired, multiple, and interconnected. Given that women experience higher levels of poverty, discrimination, and gender-based violence, it is critical to recognize and address issues that are particular to women in providing services and developing programs and models. For Latinas, it is important to consider not only gender related-factors, but also how minority status and culture-related issues may further contribute to increased rates of substance use and also hinder access to and use of behavioral health services.

As the largest minority in the US, Hispanics and Latinos comprise 17% of the total US population, with 49.35% being women. In terms of substance use:

Gender-based violence is a reality that must be addressed when working with all women, including Latinas. According to the National Crime Victimization Survey, 1 in 6 females ages 13 or older experience rape, attempted rape, or sexual assault (OVC, 2016). Campesinos or female farm workers are 10 times more vulnerable than others to sexual assault and harassment at work (Lopez-Treviño, 1995.) Among all the burdens Latinas bear, these are often the heaviest. Immigrant Latina domestic workers are especially vulnerable to sexual exploitation because they depend financially on their employers, live in constant fear of being deported, suffer social isolation, and may be vulnerable to their employer's demands.

Based on the US Census Bureau projections, by the year 2050 the number of Latinas who have had violent experiences may reach 10.8 million. However, in the National Violence Against Women Survey, Latinas were less likely to report rape than other groups (OVC, 2016). In another report, 77% of Latinas surveyed indicated that sexual harassment was a major issue in their workplace (Southern Poverty Law Center, 2009). Research indicates that women survivors of sexual abuse in all its manifestations are more vulnerable to substance use than those without histories of sexual abuse. Authors have suggested that substance use may be a way of coping with symptoms related to Post Traumatic Stress Disorder (PTSD) and depressive symptomatology associated with experiences of trauma and violence.


In terms of Intimate Partner Violence (IPV), national statistics report that approximately 1 in 3 Latinas have experienced physical violence by an intimate partner, and 1 in 12 report such events in the previous 12 months (Klevens, 2014).  Reported rates of IPV were lower for Mexican immigrants (13.4%) than for persons of Mexican descent born in the U.S.  Data also indicates that immigrant women (including Latinas) who are married are more likely to experience IPV than unmarried women. A study that included 2,000 Latinas found 63.1% of women identified being victimized in their lifetime.

The intersection between IPV and substance use

The intersection between IPV and substance use among Latinas has been recognized as a significant factor for treatment and recovery.  Studies have suggested that substance use among women survivors of IPV may be encouraged or forced to use substance by an abusive partner as a control mechanism, which may prevent women from accurately assessing the level of danger posed by their perpetrators. Substance use and withdrawal symptoms may make it difficult for women who use substances and are in a violent relationship to access services such as shelter, advocacy, or other forms of help.

Co-occurring substance use and PTSD

Research on substance use has documented high rates of co-occurring substance use and PTSD. For women, these rates range from 30-59%; two to three times higher than for men (Najavits, 2007).  These studies report higher rates of PTSD than for the general population of women; providing further evidence on the intersection between the two. Furthermore, when studies of women who use substances consider a lifetime history of trauma (vs. a diagnosis of PTSD), rates of victimization range from 55-99%. These studies have found that women report more experiences of victimization, by multiple perpetrators, and for longer periods of time. This in turn, may result in a complex manifestation of symptoms that will require attention to co-occurring disorders.

Culture, substance use treatment, and recovery for Latinas

Latina survivors experience specific, culture-related barriers to services that need to be taken into consideration while developing programs and interventions. There remains still a lack of bilingual, integrated services that facilitate engagement for substance use and violence/trauma.

Also, programs and clinicians should consider the cultural values of Latina survivors. For example, traditional gender role expectations known as machismo and marianismo play a role in the way IPV is understood and faced by many. Also, familism, which encompasses a family-centered approach to life, may play a role in a Latina's decision to stay in an abusive relationship. Spirituality may also play a role in a person’s understanding of IPV.  All of these elements are important to consider in the recovery process for a Latina as well as in developing programs and interventions.

Other barriers Latinas face in terms of services include immigration status, lack of health insurance, and lack of women-oriented support groups for recovery. Some programs do not provide services for individuals without citizenship documentation. Cultural and physical isolation may prevent a Latina survivor from accessing services. There also exists a lack of trust in a system that has been oppressive towards immigrants. Treatment centers or shelters that exclude women who use substances may also serve as a barrier to services due to the highly documented intersection of these two issues.

The workforce working with Latinas needs to understand how these factors affect their clients with--or at risk of developing-substance use disorders. Please join us in Miami on September 14 as we explore ways to support Latinas in their recovery process and help them achieve health and wellness.

Related Resources from the National Hispanic and Latino ATTC Network:

Encuentro Latino.  (May, 2015).  The Facts on Latinos and Domestic Violence [Fact sheet].  Retrieved from: http://www.latinodv.org/handouts.php

Darice Orobitg, PhD, is the Training and Technical Assistance Coordinator for the National Hispanic and Latino ATTC. s. Originally from San Juan, PR., Dr. Orobitg received her BA in psychology at Washington University in St. Louis. She obtained her Ph.D. in Clinical Psychology from the Carlos Albizu University in San Juan, PR. As a research assistant, her focus was on child assessment and intervention and she later coordinated an NICHD sponsored study for Innovaciones Psicoeducativas (ISIED, Inc.) on early identification of learning and developmental disabilities. As a clinician, she has experience working in the Puerto Rico Rape Crisis Center as therapist, educator, and services coordinator. She has been in private practice since 2005.