Alcohol in the Dairy State: Can Wisconsin Change its Drinking Culture?


Wisconsin gets a lot of attention for its alcohol culture. And during April, Alcohol Awareness Month, it’s hard not to be reminded of the news and statistics about alcohol use in the Dairy State—especially if it’s your home state.  (The NIATx main office and the ATTC Network Coordinating Office are both located at the University of Wisconsin-Madison.) 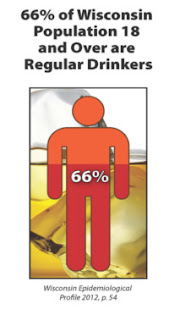 For example, last year, Wisconsin made national headlines as the location of 12 (yes, 12!) of the “drunkest” cities in the United States. The online news outlet 24/7 Wall St. published the report, which was based on a review of self-reported data on heavy and binge drinking rates across the country.

Julia Sherman, Coordinator of the Wisconsin Alcohol Policy Project  (WAPP) at the University of Wisconsin Law School, says the report is misleading, but acknowledges Wisconsin has a serious alcohol problem. “The writers at 24/7 Wall Street used aggregated county-wide data and made a judgement about individual municipalities. Interesting story but flawed analysis,”  says Sherman.

Still, there’s no doubt that Wisconsin has a serious problem with over consumption of alcohol:

Unlike most other states, in Wisconsin, alcohol is licensed locally and most enforcement is handled by local law enforcement.

“Wisconsin doesn’t have an alcohol beverage control board (ABC), a state police force, or a department that reviews new alcohol products or advertising,” says Sherman.  On the other hand, municipal licensing of alcohol outlets gives local leaders a significant amount of control over the community alcohol environment – when they exercise it,” she adds.

Sherman has worked on public policy for most of her career. In 2001, she began her work in alcohol policy at the American Medical Association’s Office of Alcohol and Other Drug Abuse in Chicago and later served as the national Field Director for the Center on Alcohol Marketing and Youth at Georgetown University.  In 2009, she chaired the Alcohol, Culture and Environment Work Group of the Wisconsin Sate Council on Alcohol and Other Drug Abuse and authored its final report, Changing Wisconsin’s Alcohol Environment to Promote Safe and Healthy Lives.

The Wisconsin Alcohol Policy Project (WAPP) was established specifically to provide training and technical assistance to support organizations and local governments working to improve their alcohol environments. The evidence-based tools WAPP provides help communities understand the scope of their authority and what they can do to change their alcohol culture.

Research on alcohol control shows that across countries and cultures, four basic factors shape the alcohol environment:
Three of the four factors are well within the control of local communities, says Sherman. The state alcohol tax rate determines local alcohol prices and is set by the Legislature.

In some communities, an over-concentration of alcohol outlets has led to serious problems with alcohol-related crime and disorder. 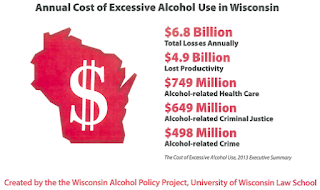 A number of Wisconsin communities are using local ordinances to address alcohol-related problems.  For example, unlike other states Wisconsin state law does not cover bartender drinking, so a number of communities adopted “sober-server” requirements to limit the blood alcohol level of people serving or selling alcohol.

Two campus communities, La Crosse and Menomonie, adopted public intoxication ordinances to enable law enforcement to intervene and get seriously intoxicated individuals to safety or medical care.  After a string of drownings, the City of La Crosse adopted a series of ordinances that, combined with special efforts, have reduced alcohol problems at all three local campuses.

One area where Wisconsin has started to reverse the trend is in underage drinking.

“Our rate of underage drinking has dropped from the highest in the nation to the national average,” says Sherman. “We still have a long way to go to change drinking behaviors in Wisconsin, but this success shows that if we can change, nobody else has an excuse not to.”

What’s the drinking culture in your state? Is your state also working on strategies to reduce problem alcohol use a the local level? Share your story in the comment section below.