Responding to the opioid epidemic

We should be marching in the streets over the state of opioid use disorder treatment.

The epidemic of accidental opioid poisoning has received increasing media coverage as opioid-related deaths have skyrocketed. But the magnitude of the problem is still largely unappreciated. The New York Times recently illustrated that annual drug-related mortality in the United States has surpassed peak annual deaths related to AIDS, gun violence, and car accidents. What’s most troubling is that the rate of opioid-related deaths is rising faster than ever.


At the height of the AIDS epidemic, activists used rallies, marches, “die-ins”, and other targeted “actions” to draw media attention to the human cost of the AIDS epidemic. A primary complaint was that the FDA wasn’t getting experimental medications to market fast enough. Through creative and persistent protest AIDS activists fundamentally changed the way that the FDA approves new medications.

When effective antiretroviral medications were discovered, AIDS-related mortality plummeted even as the number of persons living with HIV and AIDS continued to climb.


There are several similarities between AIDS and Opioid Use Disorder (OUD).

There is at least one glaring difference between the AIDS and OUD mortality crises. AIDS caused record annual deaths just before effective medications were discovered and brought to market. OUD is currently contributing to record mortality rates even though life-saving medications (methadone and buprenorphine) have long been FDA-approved and marketed to providers. Methadone was FDA-approved for OUD in 1972 and buprenorphine in 2003.

What’s the catch? As of March 31, 2016, 82% of facilities that treat addiction provided outpatient treatment, but only 21% provided outpatient methadone or buprenorphine maintenance. For that reason, only a minority of persons with OUD are provided the two maintenance pharmacotherapies known to drastically decrease their morbidity and mortality risk. If pharmacotherapy for OUD were implemented as widely as antirotroviral therapy for HIV/AIDS, we would save tens of thousands of lives and begin to reverse the epidemic of opioid-related deaths.

Readers may contest the claim that medical treatment would reverse the overdose epidemic. The claim can only be tested empirically by increased access to medical treatment; but the research support for this approach is overwhelming. Consider the most recent meta-analysis of treatment cohorts, including more than 120,000 methadone patients and more than 15,000 buprenorphine patients. The methadone cohorts were followed between 1 and 13 years and the buprenorphine cohorts between 1 and 5 years. When patients were undergoing maintenance medical treatment, their all-cause mortality rates were two (buprenorphine) and three (methadone) times lower than when they were out of treatment. 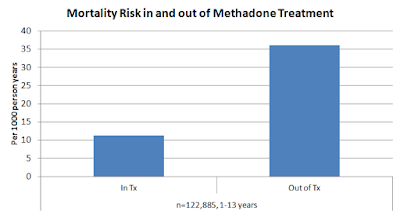 
AIDS activists were taking to the streets to get experimental (and often ineffective) medications to market faster. Drug and alcohol treatment providers fail in a large majority of cases to deliver effective and often life-saving pharmacotherapy to persons with OUD. The rate at which persons diagnosed with OUD are denied effective medical treatment has no comparison among other potentially fatal medical conditions.

This gap between evidence and practice is not unprecedented in behavioral health. Even scientists established the effectiveness of depression medication, many prominent treatment centers refused to provide medication to their patients suffering from depression. As detailed in a recent article by Luis Guiffra, MD, the tide turned when one prominent treatment center was sued by a former patient for malpractice. 41-year-old Raphael Osheroff enrolled at Chestnut’s Lodge for depression, anxiety, and suicidality. For seven costly months, he was treated unsuccessfully with psychodynamic psychotherapy. After transferring to a medical treatment center, he was provided medication and his condition improved rapidly. In a landmark malpractice case, Osheroff and Chestnut Lodge settled for an undisclosed amount, and the treatment center eventually shut its doors. Dr. Guiffra argues that the field of OUD treatment is ripe for legal action against treatment centers that ignore science in favor of tradition, denying patients effective, often life-saving treatment.

The “opioid crisis” has attracted a huge investment of money for prevention and treatment. But it may be that we could achieve the most important gains by using the money we already have more effectively. This blog series will attempt to provide pragmatic, evidence-based guidance on how we can achieve the goal of reversing the overdose epidemic. Topics will include:

We have the resources we need to treat OUD effectively. By implementing them widely and consistently we can revolutionize the standard of care and reverse the overdose epidemic.

Ned Presnall is the Director of Clayton Behavioral and Adjunct Professor at Washington University in St. Louis, Missouri. He presents widely on the topics of addiction, mental health, and medication assisted treatment. Ned is passionate about reducing the stigma against persons with addiction and against medication assisted treatment through discourse and public engagement.